Rev. Waitstill and Martha Dickie Sharp leading adults and children to an airplane in Czechoslovakia, 1939.

An opening reception for the exhibit, A Hymn for the Brave: the Sharps and Humanitarian Work in World War II, will be held at the John Hay Library on Tuesday, September 20, 2016 at 6 p.m., followed by a screening of Defying the Nazis: The Sharps’ War at 8 p.m. in the Patrick Ma Digital Scholarship Lab in the John D. Rockefeller, Jr. Library. The exhibition will be on view through December 23, 2016 at the John Hay Library and is open to the public during hours when Special Collections Services are available. Admission is free. Please check the John Hay Library website for detailed information about hours. 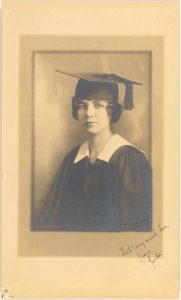 Ninety-four years ago, in the Fall of 1922, Martha Ingham Dickie entered Pembroke College as a scholarship student. In her four years at Brown, Martha Dickie took up a focused plan of study while participating actively in campus governance, social clubs and athletics. She was, as her yearbook entry noted, “[a] very busy person… and yet … everyone’s friend, especially the lowly and lonely…”

After graduating in May 1926, Martha Dickie went on to work on a graduate degree in social work at Chicago’s Northwestern University, where her studies included a practicum at Hull House, the settlement house project made famous by Jane Addams. But life soon intervened in her professional plans: in 1927, Martha was introduced to a young Harvard law school graduate with a spiritual bent — Waitstill Hastings Sharp, the son of academic Dallas Lore Sharp (Brown 1895). Martha and Waitstill married one year later; Waitstill went on to attend Harvard Divinity School and was ordained as a Unitarian in 1933. Initially assigned to a church in Meadville, Pennsylvania, Waitstill was soon called to shepherd the Unitarian congregation in Wellesley, Massachusetts, in 1937. Martha and her husband took to parish life like fish to water; it gave them a way to employ the caring social and custodial skills that were innate to them both. So perhaps it was natural that when the American Unitarian Association came recruiting for a relief project in Nazi-occupied Czechoslovakia in 1938, the Sharps were quick to volunteer.

A Hymn for the Brave: the Sharps and Humanitarian Work in World War II

This fall’s main exhibition in the John Hay Library, A Hymn for the Brave: the Sharps and Humanitarian Work in World War II, tells the story of these two intrepid people and their humanitarian work as founding members of the Unitarian Service Committee. The exhibition is drawn from personal papers of the Sharps, along with those of USC co-founders Robert Cloutman Dexter (Brown A.B. 1912, A.M. 1917) and his wife Elisabeth Anthony Dexter, and illustrates the efforts of these two couples to administer aid to refugees and others in need across Nazi-occupied Europe under the aegis of the American Unitarian Association and in collaboration with other relief organizations. Papers of the Sharps and the Dexters are held at the Hay Library and are available to interested researchers.

Defying the Nazis: The Sharps’ War

The exhibition aligns with the release of a new film by Ken Burns and Artemis Joukowsky III airing on PBS this fall. Entitled Defying the Nazis: The Sharps’ War, the film tells the story of the sacrifices made, risks taken, and successes achieved by the Sharps in pursuing humanitarian relief work for the Unitarian Service Committee.