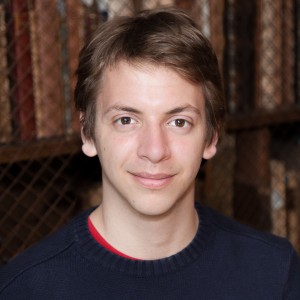 The Library is pleased to announce that Andrew Beers ‘15 is the winner of this year’s Library Innovation Prize.  Andrew’s presentation entitled “Grand Banks Iceberg Mapper” used data from the U.S. Coast Guard and from a number of early print sources, including maritime newspaper accounts, to plot the location of icebergs in the Western North Atlantic. His mapping allowed a visual picture of the changing locations of iceberg sightings over time, showing a recent trend of icebergs moving north with more being sighted north of Newfoundland than south.

The presentation in the Patrick Ma Digital Scholarship Lab included data from the late 1880s to the present and a slider that could show the change in sightings over time in any given year. Beers was careful to observe the limitations of his data, noting that pre-Coast Guard data tended to be made by vessels only in shipping lanes and that some of the mappings of his data suggested some less precise geographic locations from his source data sets. Beers used a combination of D3 for the large screen visualization and a separate PowerPoint presentation on the smaller cart-mounted screen to give some visual historic perspective.

Miranda Olson’s project entitled, “Digital Analysis: Designing Unique Interfaces with Literature,” provided a visual guide to the process of employing Digital Humanities techniques to analyze literary texts. This project, done for Professor James Egan, was built using PowerPoint and Google docs. She used a custom screen layout in the Digital Scholarship Lab to focus attention on the current slide in the middle of the wall while continuing to provide a visual connection to the other slides around it. The second, cart-mounted screen was used to provide access to the underlying text.

Tushar Bhargava and Samuel Crisanto, representing the Brown Digital Literacy Forum (DigLit), presented their project entitled, “Tracking the Trackers,” which employs a freely available plug-in for Firefox called Lightbeam to visualize which sites track a particular user as he or she navigates the web. They were able to make use of D3 and custom Mozilla libraries with Lightbeam to enrich the visualization by changing the default colors and to reset the sizing of the app so that it would work well on the Digital Scholarship Lab wall. it was a truly chilling experience to see how quickly these tracking sites “attach” to a web browser as the result of a particular web search.