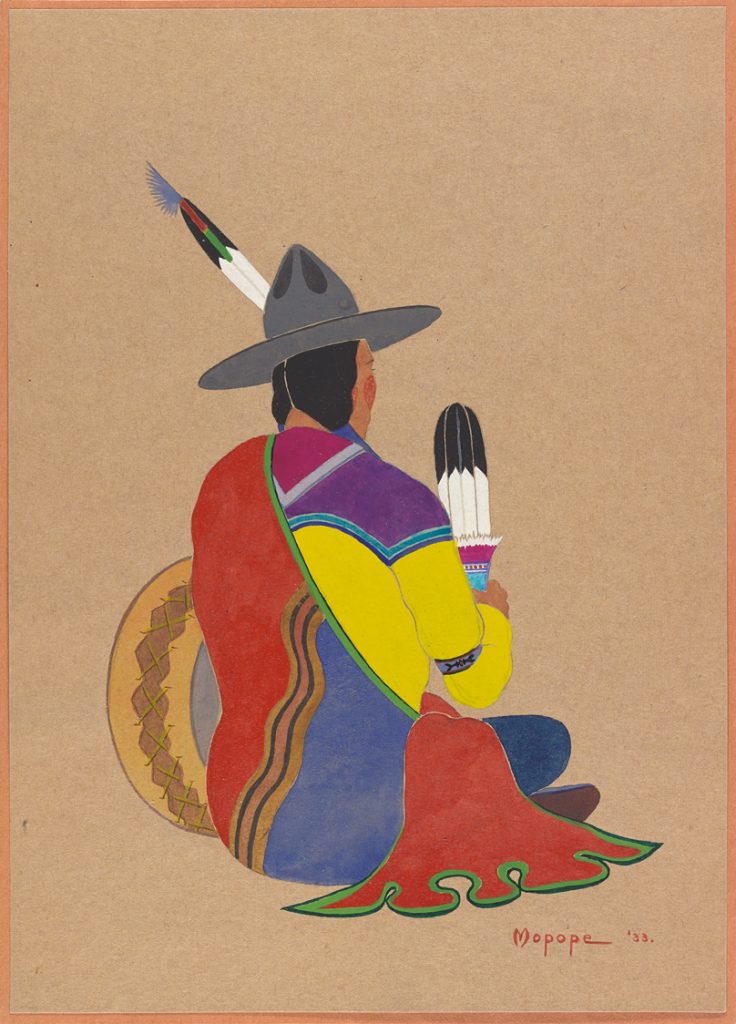 A chance discovery returns the color and life to indigenous paintings

Ninety years ago, in 1926, a small group of traditional artists from the Kiowa nation—Spencer Asah, James Auchiah, Jack Hokeah, Stephen Mopope, Lois Smoky and Monroe Tsatoke—entered the University of Oklahoma to participate in a specialized art program designed to encourage their development and promote their work. Later known as the “Kiowa Five,” these artists made their international debut in 1928 at the First International Art Exposition in Prague, and were soon showing their work in other countries. Their exhibition at the Venice Biennial in 1932 was noted, according to author and art teacher Dorothy Dunn, as “the most popular exhibit among all the rich and varied displays assembled” there.  In 1929, a portfolio of pouchoir (stencil) prints was created by a fine arts publisher in Nice, France under the title Kiowa Indian Art, which helped bring their art to a wider audience.

The eldest and most prolific of this small group of Kiowa artists was Stephen Mopope (Qued Koi, or Painted Robe), grandson of the warrior Appiatan and grand nephew of the artists Haungooah (Silver Horn) and Oheltoint.  Mopope was 28 when he arrived at the University of Oklahoma, but his work as an artist had been nurtured from a very young age. His great uncle, Haungooah, recognized his talent and taught him traditional techniques. Later, at the St. Patrick’s Mission School in Anandarko, his art teacher, Sister Olivia Taylor (Choctaw), further supported his artistic development. Mopope’s art portrays the traditional dance, music, and ceremonies of the Kiowa people, reflecting the world in which he lived. He was a skilled practitioner of many elements of traditional culture, including flute-playing, ceremonial dance, and farming, all of which became ongoing subjects of his paintings. In 1939, Mopope received a commission to paint the mural “Ceremonial Dance” for the Department of the Interior’s Udall Building, where it is still viewable today, as part of a New Deal agency project.

A few years ago, while going through some old boxes in the stacks of the John Hay Library, a staff member came across seven of Mopope’s original paintings in an old print collection. Their bold colors and unique subjects popped out even through layers of dust and grime. How Brown University acquired these paintings is not recorded, but they were recently cleaned and restored. Please come see the remarkable beauty and spiritual presence for yourself. A selection of four of these paintings will be on view on the second floor of the John Hay Library until the end of November 2016 in honor of Indigenous People’s Day.