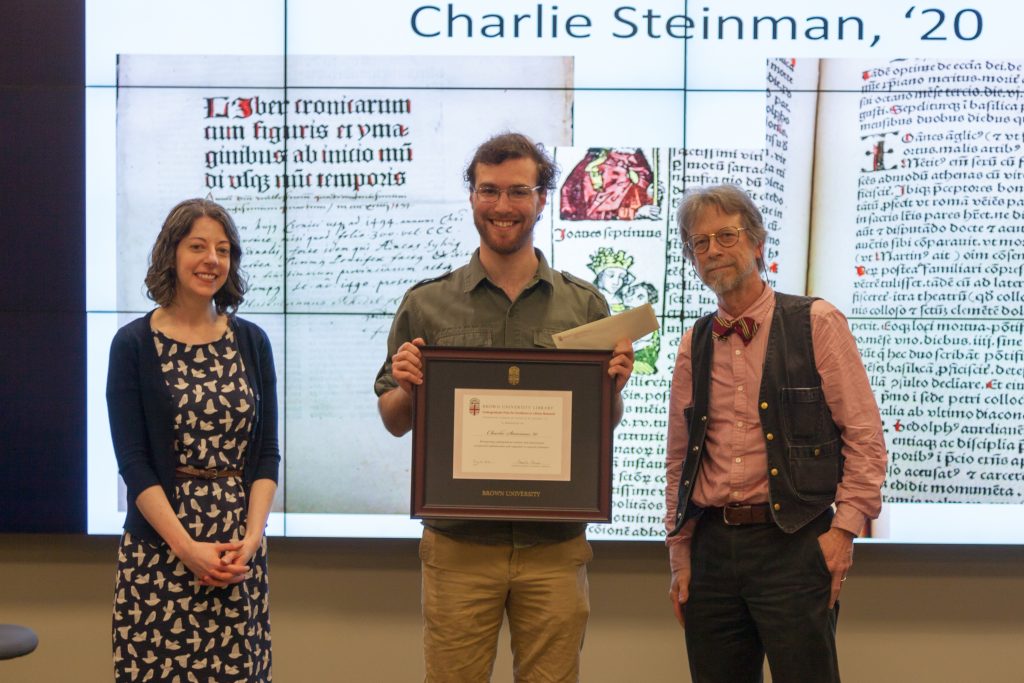 This year’s Undergraduate Prize for Excellence in Library Research was awarded to Charlie Steinman ’20 for his paper: “’Martin Luther’s whore more than a pope’: Annotation, Disgust, and Materiality in the Reformation Reception of the Pope Joan Myth.” The paper was written for History 1964A: “Age of Impostors: Fraud, Identity, and the Self in Early Modern Europe,” taught by Professor Tara Nummedal.

The award was presented to Charlie at a celebration in the Digital Scholarship Lab in the Rockefeller Library on May 4, 2018.

Charlie’s paper examined at the myth of Pope Joan as it was received in the Reformation and Counter-Reformation Europe, especially as revealed in printed books of the period. He had discovered that the image of Pope Joan in Brown’s copy of the Nuremburg Chronicle was scratched out, and further searching revealed many copies of this and other printed chronicles have similar effacements, sometimes with marginal notes. He determined that these effacements were the work of Catholic readers, who were responding to Protestant uses of the Pope Joan myth to discredit the papacy and its purported apostolic succession.  The Catholics wished to show that Pope Joan did not exist and sought to remove her from the histories.

Charlie cites one example of defacement in a copy of the Nuremberg Chronicle in the Universitäts und Landesbibliothek Darmstadts in which the reader both smudged out the image of Pope Joan and left an annotation around it. “He/she writes: ‘Martin Luther’s whore more than a pope.’ (Martini Lutheri concubina potiusquam papa).”

One of the prize judges wrote, “This is a highly original, engaging, and readable work that makes impressive use of archival materials both at Brown and beyond. The affective reading of annotations is poised to contribute to future scholarship.” Another judge commented, “Both the description of the author’s process of research and the paper itself read like a mystery novel, and one can “see” his mind working (I wonder if defacement occurs in other copies…?) as he goes from text to text, engaging various languages and libraries in the process.”

Congratulations to Charlie for a job well done! The Undergraduate Prize for Excellence in Library Research is sponsored by the Office of the Dean of the College and the Brown University Library.

This year’s panel of judges was composed of: