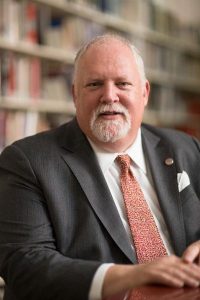 On Friday, March 17, 2017 at noon in the Digital Scholarship Lab of the Rockefeller Library, Roger Brooks, President and CEO of Facing History and Ourselves, will give a talk as part of the Library’s lecture series, The Holocaust: History and Aftermath. This event is free and open to the public. A reception will follow the talk.

The Holocaust and Human Behavior: Facing History to Build the Future

Theologian and survivor David Weiss Halivni argues that the Holocaust must forever remain an event without an explanation. “Why did the Shoah happen?” he argues, is an affront to God, and any answer is “a justification that almost smacks of participation.” Still, 40 years ago Facing History and Ourselves created a curriculum in Holocaust education designed to make meaning of the events, through rigorous study of mass murder, its causes, and the society that produced it; and through carefully honing students’ historical perspective. The special insight was that deep historical study, combined with careful reflection on identity and belonging, could help students nurture their own ongoing sense of responsibility to society. These organizational insights are found in a newly revised resource volume, Holocaust and Human Behavior, which undergirds a broader arc for understanding contemporary racism, bigotry, and prejudice upon on understanding antisemitism and the Holocaust.

Renowned educator, scholar, and leader, Roger Brooks joined Facing History in late 2014, following a long and distinguished tenure at Connecticut College as the Elie Wiesel Professor in the Department of Religious Studies (1991-2014). He also served as Associate Dean of the Faculty (2003-2007) and Dean of the Faculty and Chief Academic Officer (2007-2014). He was named Elie Wiesel Professor Emeritus of Judaic Studies at the College in 2015.

Roger is known for his leadership in curricular reform designed to prepare for and respond to the changing landscape of higher education. He developed and implemented new policies for hiring and retention of diverse faculty at Connecticut College, including systematic outreach to graduate schools and individualized retention plans. He also has a longstanding partnership with the Holocaust Education Foundation, which prepares collegiate faculty to teach curriculum related to the Holocaust and genocide. Roger is an expert in early rabbinic culture, particularly in the third- through fifth-century tax codes that emphasized the relationships between incipient rabbinic culture, the Jews, their God, and Roman Imperial power. He is the author or editor of six books and numerous articles, including several volumes of translation and commentary on foundational Jewish texts.