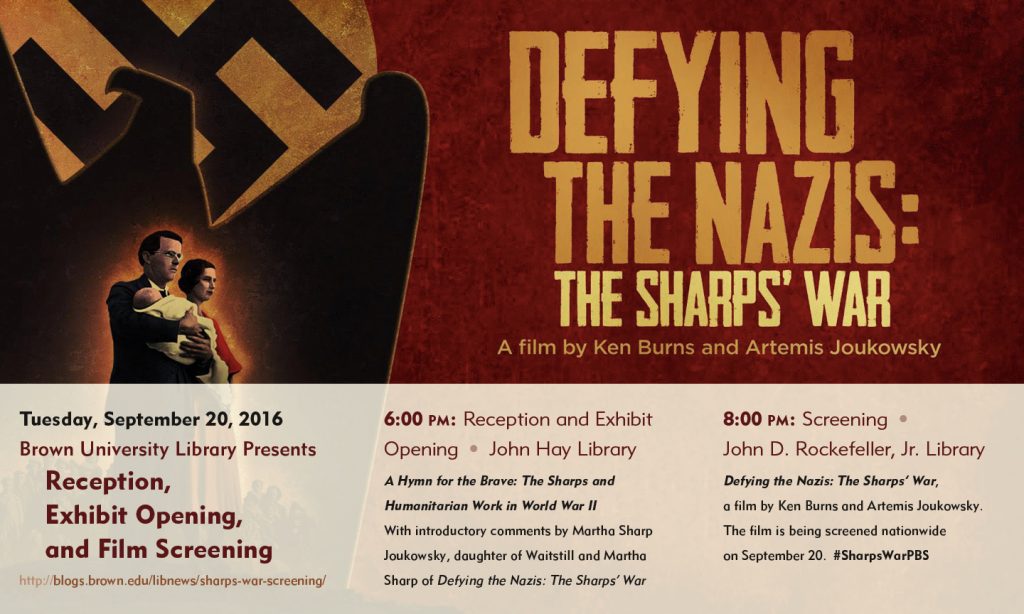 On Tuesday, September 20, 2016 at 8 p.m. in the Patrick Ma Digital Scholarship Lab in the Rockefeller Library, the Brown University Library will screen Defying the Nazis: The Sharps’ War, a new documentary by Ken Burns and Artemis Joukowsky.

At 6 p.m. on the same night, the corresponding exhibit, A Hymn for the Brave: the Sharps and Humanitarian Work in World War II, will open with a reception at the John Hay Library, 20 Prospect Streeet, Providence. Martha Sharp Joukowsky, Ph.D.’58 PhB’82 LHD’85 P’87 GP’13 GP’14 GP’17, daughter of Waitstill and Martha Sharp, will speak at the reception.

Both events are free and open to the public.

The 90-minute film tells the story of Waitstill and Martha Sharp, a Unitarian minister and his wife from Wellesley, Massachusetts, who left their children behind in the care of their parish and boldly committed to multiple life-threatening rescue missions in Europe, before and after the start of World War II. Over two dangerous years, they helped to save hundreds of imperiled political dissidents and Jewish refugees fleeing the Nazi occupation across Europe. Martha Dickie Sharp is a Brown alumna, Pembroke class of 1926.

The story is cinematically told through the letters and journals of the Sharps, with Tom Hanks as the voice of Waitstill and Marina Goldman as the voice of Martha. It features firsthand interviews with the now adult children whom the Sharps saved, as well as leading historians, authors, and Holocaust scholars, including William Schulz, Deborah Dwork, Modecai Paldiel, Ghanda DiFiglia, and Yehuda Bauer.

“The story of Waitstill and Martha Sharp is one of the most incredible tales of compassion, sacrifice and heroism that I have ever heard, and I was completely unaware of it until five years ago when Artemis Joukowsky first shared it with me,” said Ken Burns. “Nearly three years before America as a nation became involved in the Second World War, these two unassuming, so-called ‘ordinary’ Americans gave up everything they knew and loved and risked their lives to become involved in a war 4,000 miles away because they knew there were people in grave danger who needed help.” 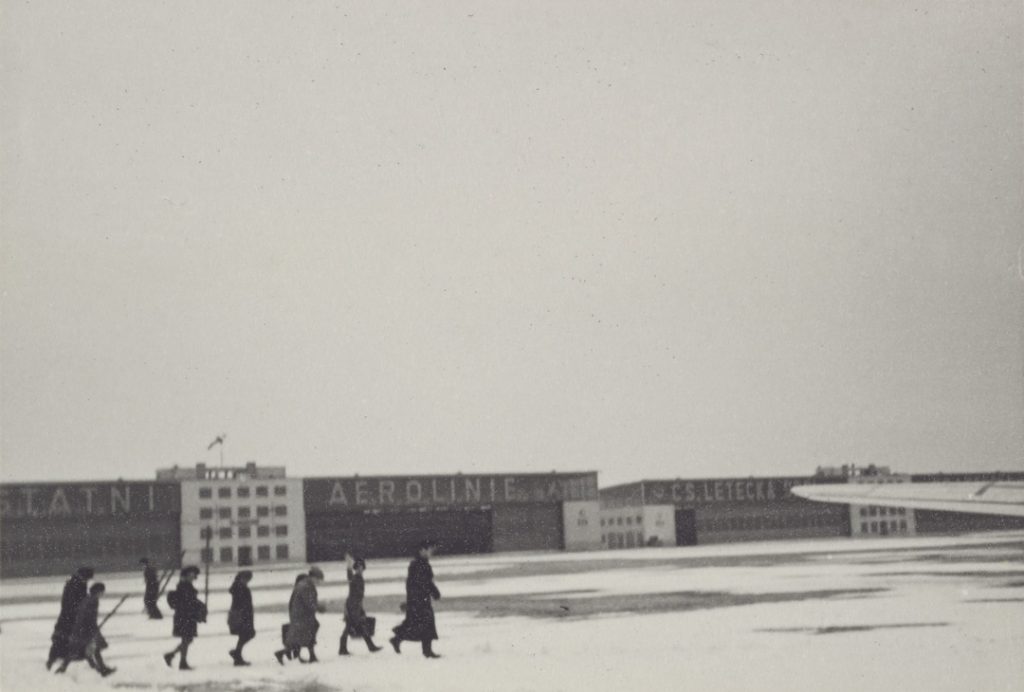 Rev. Waitstill and Martha Sharp leading adults and children to an airplane in Czechoslovakia, 1939.

Artemis Joukowsky, a film producer and co-founder of No Limits Media, is the grandson of Waitstill and Martha Sharp and has spent decades researching their story. He is the author of a companion book to the film, featuring a foreword by Ken Burns, which was published by Beacon Press.

“Beyond the cloak-and-dagger suspense of my grandparents’ experience, it is a story of what America meant to refugees fleeing war-torn countries to build new lives. And it underscores what Waitstill would call ‘a collaborative effort’ of how a small but effective underground network of rescue workers saved as many lives as they could, and how important that lesson is for what is happening today,” said Joukowsky. 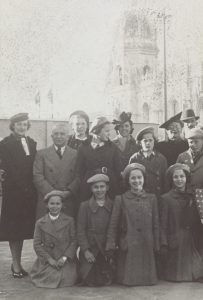 This group is part of the Children’s Emigration Project of the Unitarian Service Committee in France, organized by Martha Sharp (standing back row, 3rd from left). The Diamant triplets are in the front row. Caption in scrapbook states: “Children’s Emigration, Six Nationalities from France, Dec 1940”

In January of 1939, as Americans remained mostly detached from news reports of the growing refugee crisis in the escalating war in Europe, Waitstill received a call from the Rev. Everett Baker, Vice President of the American Unitarian Association, asking if they would travel to Czechoslovakia to help provide relief to people trying to escape Nazi persecution. He invited Waitstill and Martha to take part in “the first intervention against evil by the denomination to be started immediately overseas.” The mission would involve secretly helping Jews, refugees, and dissidents to escape the expanding Nazi threat in Europe. If they were discovered, they would face imprisonment, probable torture, and death. Seventeen other members of the church had declined. With two young children at home, the Sharps accepted. They expected to be gone for several months.

Instead, their mission would last almost two years.

During this time, the Sharps would face harrowing encounters with Nazi police, narrowly escape arrest, and watch as the Third Reich invaded Eastern Europe. Their marriage would be tested severely and the two children they left behind would be saddened by their parents’ absence. But dozens of Jewish scientists, journalists, doctors, powerful anti-Nazi activists, and children would find their way to freedom and start new lives as a result of their efforts. To recognize their heroic sacrifice, Martha and Waitstill were honored at Yad Vashem in Israel and declared “Righteous Among the Nations.” Of the thousands so honored, there are only five Americans, including the Sharps.

“The Sharps’ early grasp of the true nature of the Nazi threat and their willingness to leave the safety of America and take action to help endangered refugees was a rare act at a time of widespread indifference,” said Sara J. Bloomfield, director, United States Holocaust Memorial Museum. “Their courage and sacrifice should inspire us to reflect deeply on our own responsibilities in a world that also faces many challenges.”

In conjunction with the broadcast on September 20, a wide range of organizations will participate in community outreach and engagement activities, creating screening events and conversations that focus on what it means to be “righteous,” both as it relates to the Holocaust and genocide across the globe today. These include The United States Memorial Holocaust Museum, Hillel House, The Anti-Defamation League, The Unitarian Universalist Association, The Unitarian Universalist Service Committee, Jewish Community Centers, The Cohen Center for Holocaust and Genocide Studies at Keene State College, Brown University, Harvard University, No Limits Media and others (a full list is available at DefyingtheNazis.org). Both the Brown University Library and the Brown/RISD Hillel are hosting screenings.

In addition, WETA, the presenting public television station for Defying the Nazis, has partnered with Facing History and Ourselves, one of the world’s most respected educational organizations. FHAO is dedicated to raising students’ awareness of injustice and intolerance. Together WETA and FHAO are creating curriculum materials to help middle and high school teachers use the film and additional primary sources to engage students in the Sharps’ story of sacrifice, rescue, and moral courage. Materials will be available free to schools through PBS’ LearningMedia Services.

Funding is provided by members of The Better Angels Society including Jan and Rick Cohen and Jonathan and Jeannie Lavine; The Starr Foundation; The Threshold Foundation; and donations from individuals.