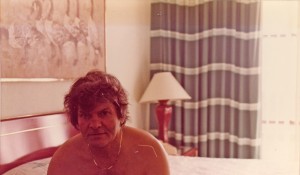 Gregory Corso in a hotel room, circa 1983

The Gregory Corso papers, a collection of unpublished poetry, writings, photographs and original oil paintings, are now available for research at the John Hay Library.  They provide an intimate look into the complicated life and work of one of the most influential Beat poets of his generation.

Corso was born in 1930 in New York City.  His mother left the family when he was a year old and he spent his childhood enduring various orphanages, foster homes, reform schools, and on the streets.  At sixteen, he landed in jail for robbery and was sentenced to three years at the Clinton State Prison. During his stay there, he compensated for his lack of a traditional education by frequenting the prison library where he discovered the works of Percy Bysshe Shelley and Arthur Rimbaud, among others, and began writing his own poetry.

He met Allen Ginsberg at a bar in Greenwich Village in 1950, a chance encounter that precipitated what was to become a lasting personal and creative relationship. Ginsberg recognized Corso’s talent and the originality of his poetic voice. Through Ginsberg, Corso met and became friends with other writers in Ginsberg’s circle, including Jack Kerouac, William S. Burroughs, and Neal Cassady, many of whom become not only influential in Corso’s artistic development, but leading figures in the Beat movement of that era. 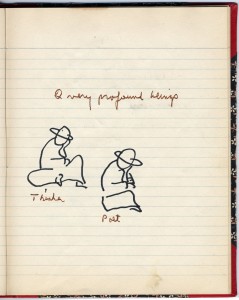 A drawing by Corso in Notebook No.8. The text reads: “2 very profound beings. Thinker. Poet.”

The manuscripts and working notebooks that make up the bulk of the Gregory Corso papers include drafts for an unpublished book of poetry he titled “The Golden Dot.” His notebooks are full of reminiscences, musings about life, drafts for poems, and drawings. The manuscripts are supplemented by correspondence, paintings, photographs, and a small but interesting assortment of other materials, including phonograph records, VHS cassettes, books and ephemeral materials. The bulk of the collection dates from 1980 to 1983 when he was living in New York City and became friends with a poet named Laura Boss.

A letter in the collection from Laura Boss to Allen Ginsberg in January 1984  summed up her experience of Corso: “Gregory is the most charming and least charming man I have ever known. He can come closer to the truth than anyone…and the most outrageous liar I have ever met…”  Researchers are encouraged to visit the John Hay Library to utilize these previously unknown resources that document the life of an influential poet and writer.