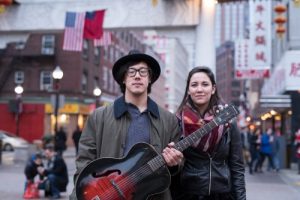 How can music call attention to America’s traumatic past and reveal what we can learn from these histories in the present? This week we talk to Julian Saporiti and Erin Aoyama, the musicians and scholars behind No-No Boy. The No-No Boy project tells stories about the Asian American experience through folk music, highlighting histories of Japanese Incarceration camp survivors, what life was like during the Vietnam War, and many other experiences. Juilan and Erin talk about where the idea for this project came from, discuss the research and traveling they’ve done to learn more about these histories, and play some of their amazing songs. We hope you enjoy this special musical episode of Public Work!

From 2004-2010, Julian Saporiti fronted the Berklee trained indie-rock group The Young Republic. After releasing several well received albums and touring extensively around North America and Europe, Saporiti relocated to Laramie, Wyoming to pursue an MA in American Studies, where upon completion, he took a job lecturing at the University. While living out west, Julian made several trips to the remains of the Heart Mountain concentration camp in northwest Wyoming where, during WW2, the US government unconstitutionally incarcerated over 10,000 people of Japanese descent, most of whom were US citizens. These trips made a profound impact and inspired Saporiti to begin interviewing camp survivors and researching the music performed in the camps. From these interviews, and thinking about his own displaced family of Vietnamese refugees, he began writing No-No Boy. He is currently living in Providence, Rhode Island, continuing this research, composing and recording music, and pursuing a PhD at Brown University where he also directs the Brown Arts Initiative Songwriters Workshop and teaches a course expanding the No-No Boy project.

Erin Aoyama is currently pursuing a Ph.D. in the American Studies department at Brown University. Her involvement with the No-No Boy Project began when she and Saporiti met in August of 2017 as participants on the Brown Japanese American Incarceration Mobile Workshop. Her research focuses on the interplay between Japanese American incarceration and the experiences of African Americans in the Jim Crow South – focusing on the two World War II concentration camps in Arkansas and the segregated American military. Aoyama’s work with the No-No Boy Project is also deeply personal. She is a legacy of Heart Mountain camp in Wyoming, where her grandmother was incarcerated during the war, and her involvement with the No-No Boy Project has been a powerful way to connect with her family’s history, using art and storytelling.

How can music call attention to America’s traumatic past and reveal what we can learn from these histories in the present? This week we talk to Julian Saporiti and Erin Aoyama, the musicians and scholars behind No-No Boy.

The music introducing this episode is excerpted from the song “New Day” by Lee Rosevere (licensed via Creative Commons Attribution 4.0 International). All other music is performed by No-No Boy.