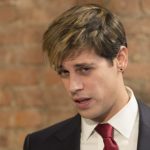 What is their reason? They cite writers like JoAnn Wypijewski, whose article in Counterpunch, “The Passion of Paul Shanley,” actually allows that Paul Shanley presents “an alarming picture of a priest obsessed with sex, one who exploited school settings or counseling sessions to make conquests.” But Wypijewski’s response to 19 affidavits attesting to sexual abuse heartens the NCRJ: END_OF_DOCUMENT_TOKEN_TO_BE_REPLACED