If any of you grew up watching Tom and Jerry, you would recognize this cunning little mouse from one of the most famous cartoon duos, Jerry. Jerry has always found a way outsmart his recurring nemesis – Tom. You name it, from using Tom’s schemes to catch Jerry against him to finding a shark fin to pretend to be a shark; this quick-witted mouse has always found a way to escape becoming Tom’s next dinner plate since 1940! Since Jerry happens to be a mouse, he would have the brain structure of a one; however, since he is the most intelligent character appearing in the series, especially since he out-tricks Tom and steals the cheese every time. I believe he would have a larger cerebral cortex, specifically a larger frontal lobe since it is responsible for initiating and coordinating motor movements and higher cognitive skills, such as problem solving, planning, and organizing. His parietal lobe and occipital lobe, working along with the Thalamus to pass sensory information, would also be larger since he pays close attention to his surroundings in order to avoid being caught by Tom and the humans in the show (since they do not want mice in their house). Furthermore, since Jerry stands up and runs throughout the series, along the background knowledge that mice have spinal cords, Jerry would have one as well. 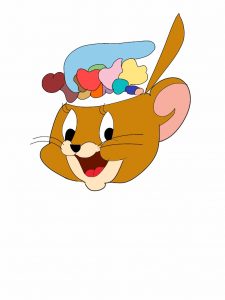