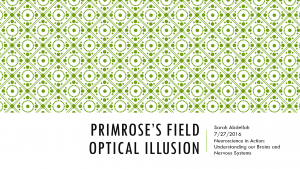 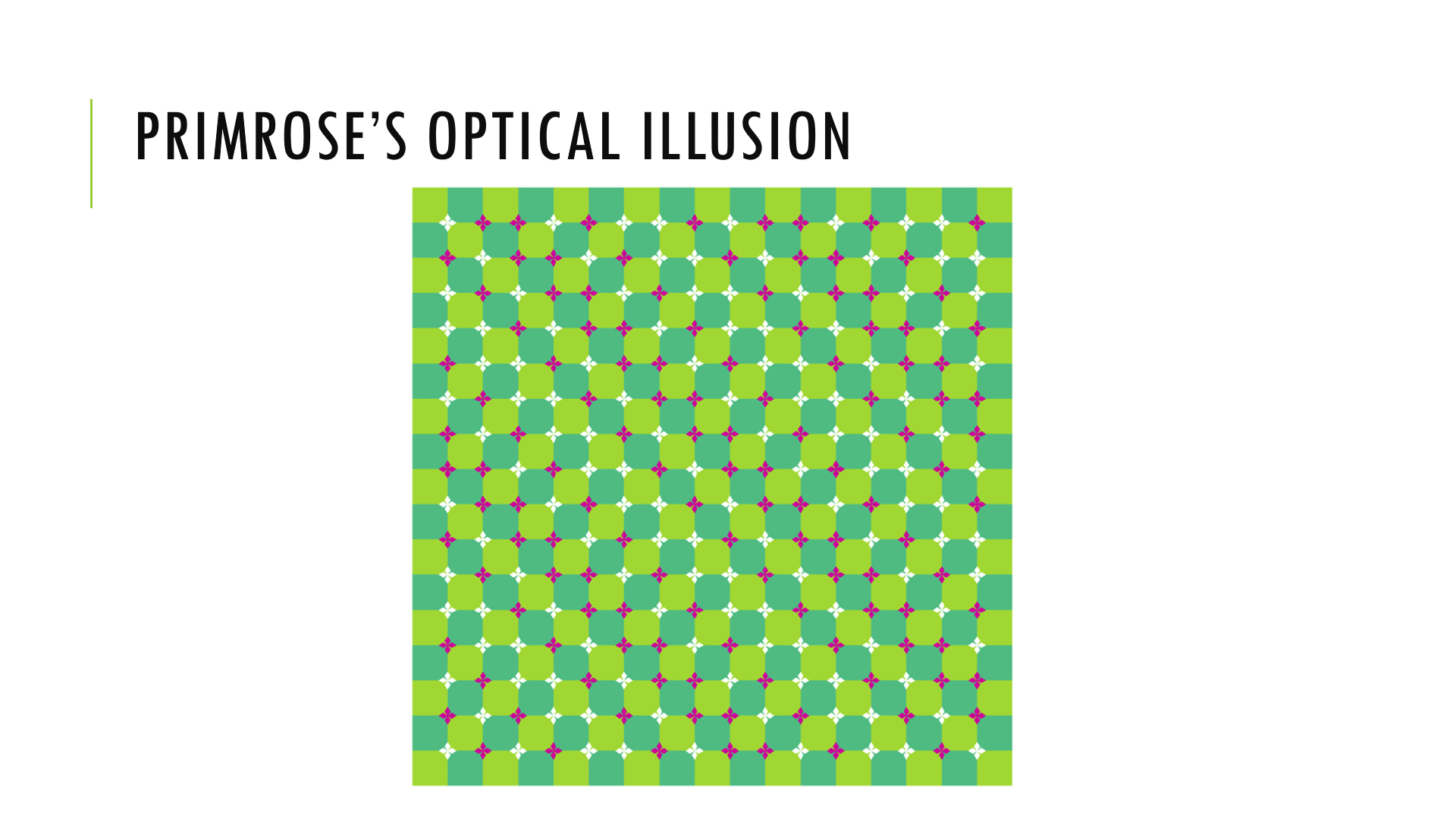 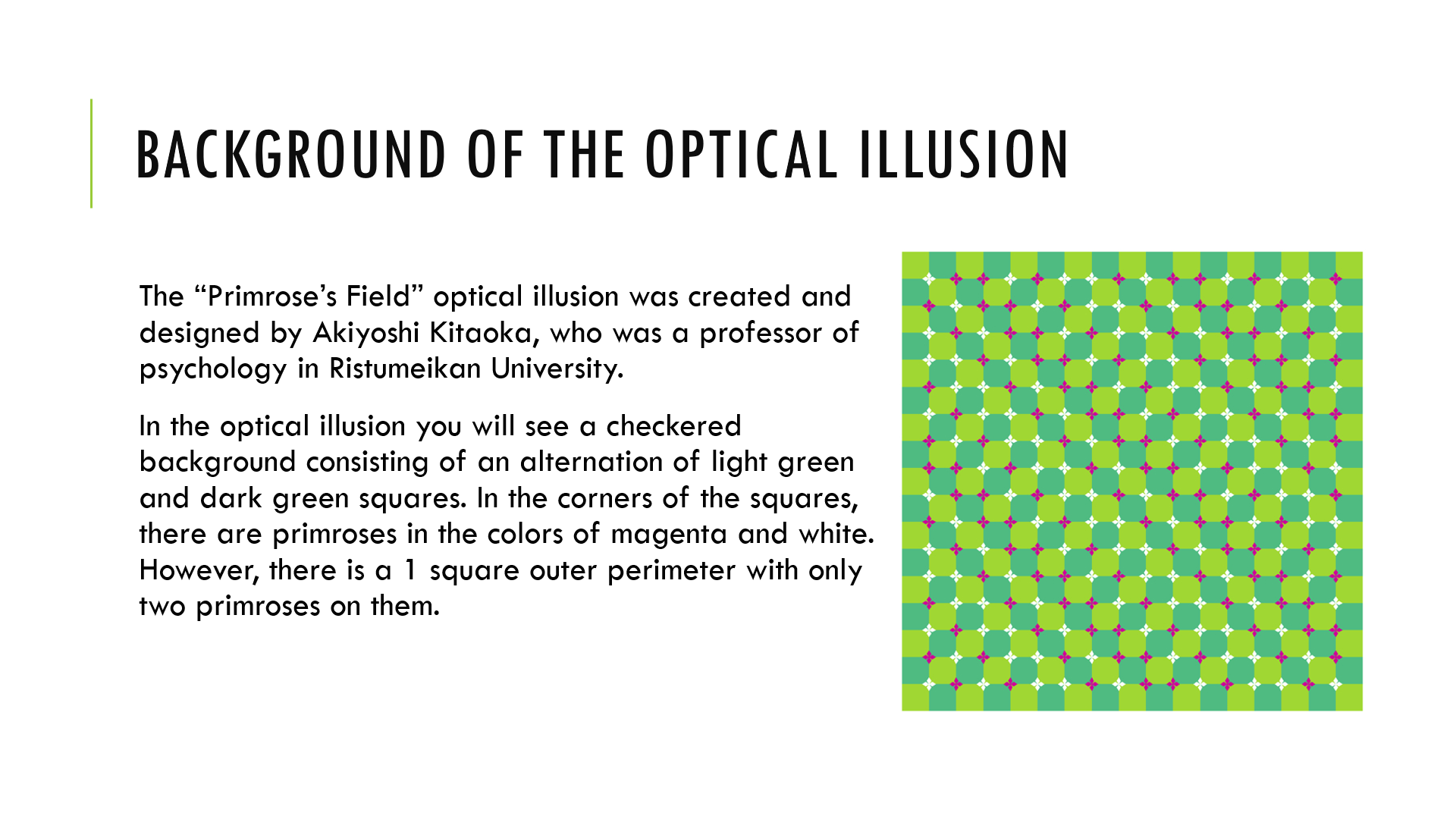 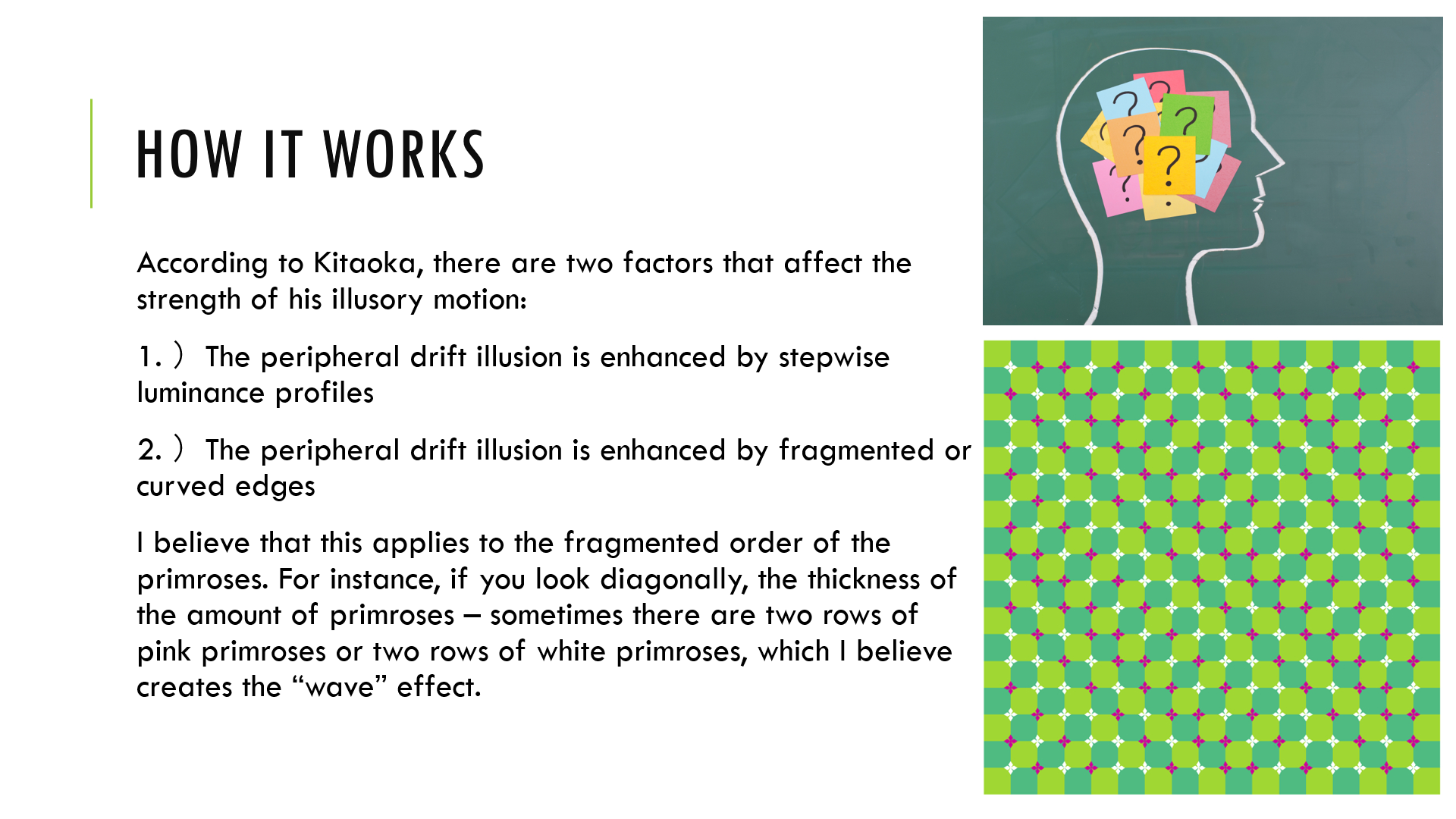 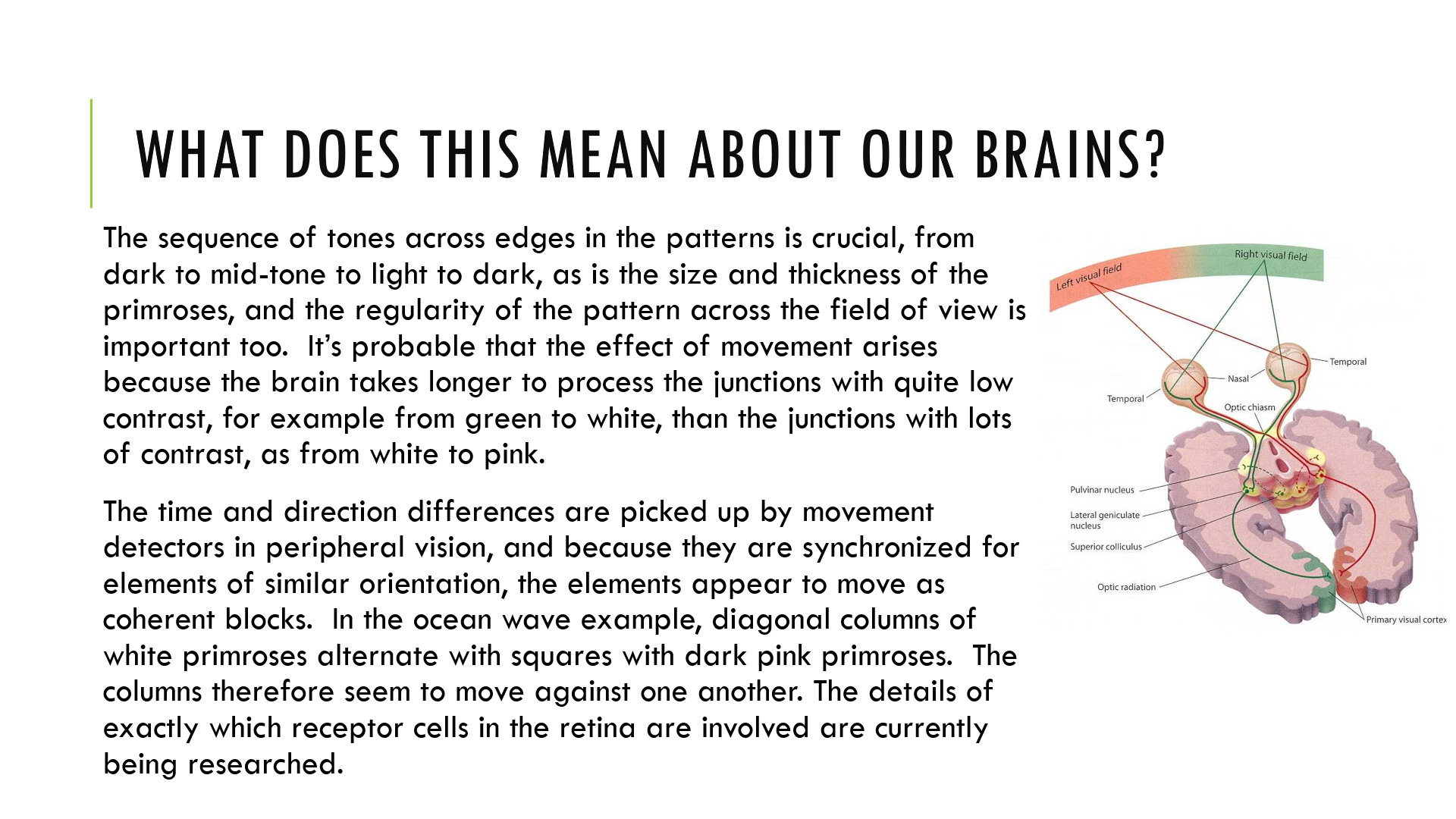 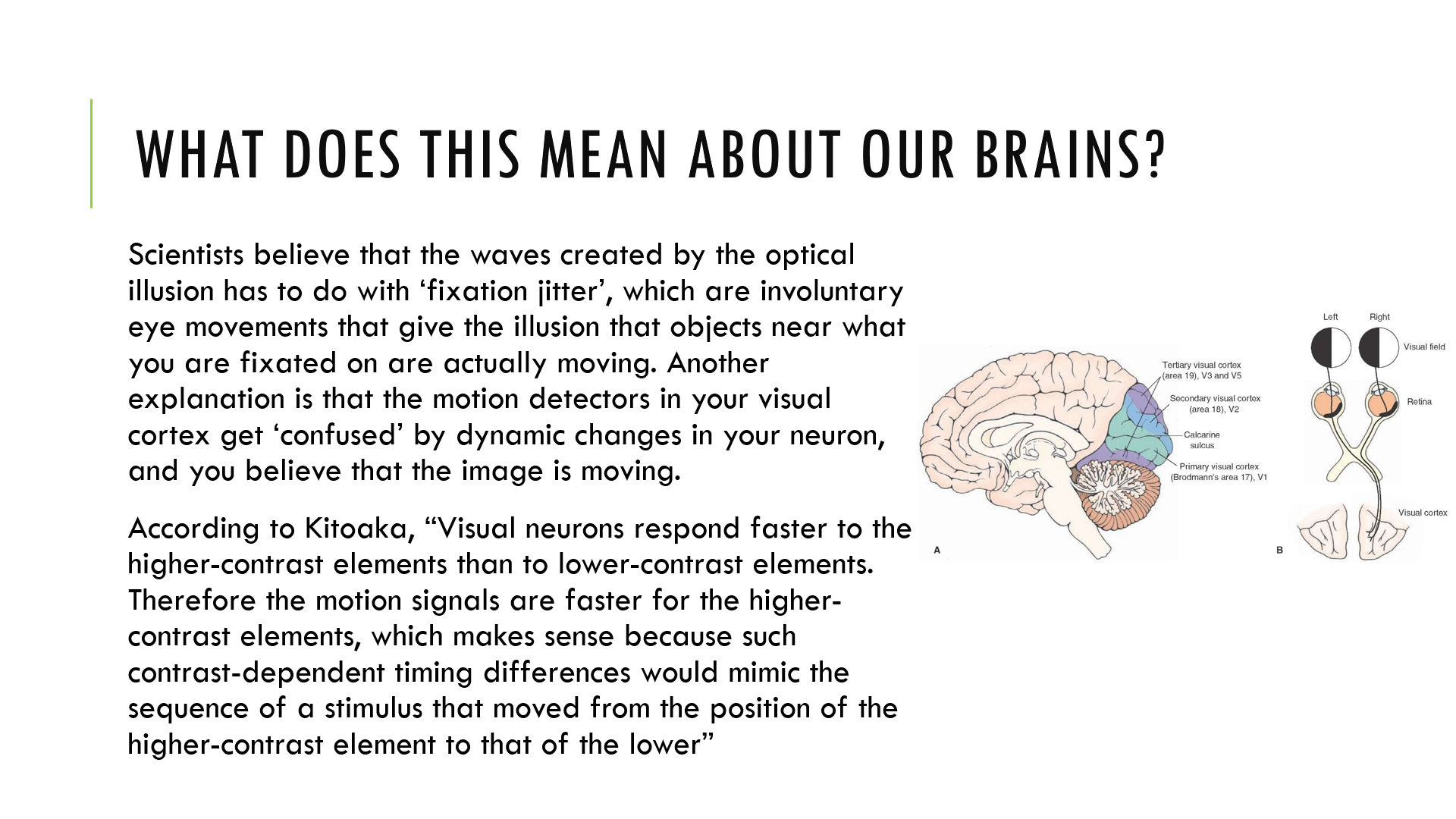 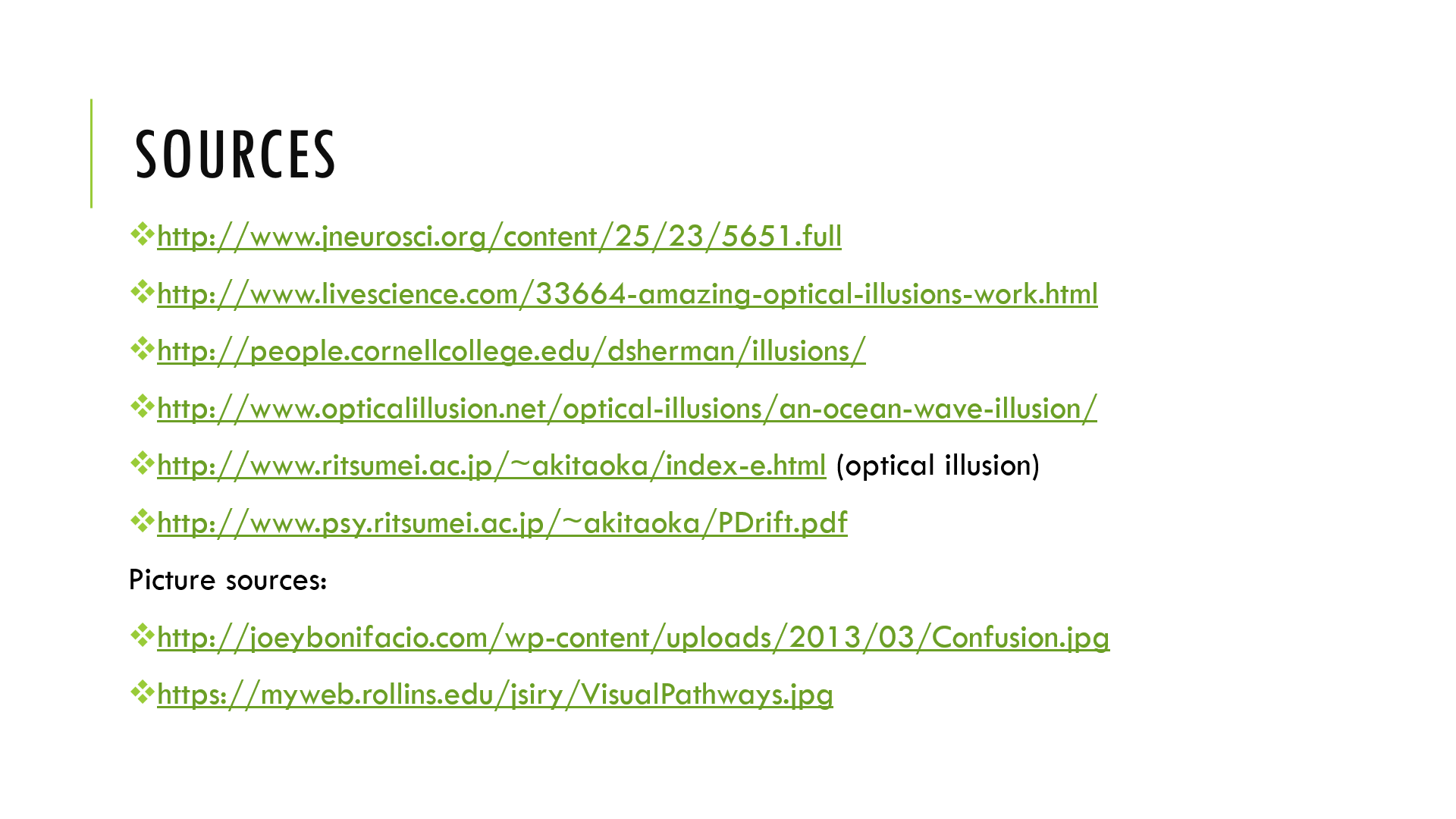 I created a PowerPoint presentation for this assignment; however, it would not allow me to upload it, so I have attached the screenshots of my presentation! I would recommend zooming in, in order to view the effects of the optical illusion!

Here is a transcript of the presentation if you cannot read it:

The “Primrose’s Field” optical illusion was created and designed by Akiyoshi Kitaoka, who was a professor of psychology in Ristumeikan University. In the optical illusion you will see a checkered background consisting of an alternation of light green and dark green squares. In the corners of the squares, there are primroses in the colors of magenta and white. However, there is a 1 square outer perimeter with only two primroses on them.

According to Kitaoka, there are two factors that affect the strength of his illusory motion:

I believe that this applies to the fragmented order of the primroses. For instance, if you look diagonally, the thickness of the amount of primroses – sometimes there are two rows of pink primroses or two rows of white primroses, which I believe creates the “wave” effect.

The sequence of tones across edges in the patterns is crucial, from dark to mid-tone to light to dark, as is the size and thickness of the primroses, and the regularity of the pattern across the field of view is important too.  It’s probable that the effect of movement arises because the brain takes longer to process the junctions with quite low contrast, for example from green to white, than the junctions with lots of contrast, as from white to pink.

The time and direction differences are picked up by movement detectors in peripheral vision, and because they are synchronized for elements of similar orientation, the elements appear to move as coherent blocks.  In the ocean wave example, diagonal columns of white primroses alternate with squares with dark pink primroses.  The columns therefore seem to move against one another. The details of exactly which receptor cells in the retina are involved are currently being researched.

Scientists believe that the waves created by the optical illusion has to do with ‘fixation jitter’, which are involuntary eye movements that give the illusion that objects near what you are fixated on are actually moving. Another explanation is that the motion detectors in your visual cortex get ‘confused’ by dynamic changes in your neuron, and you believe that the image is moving.