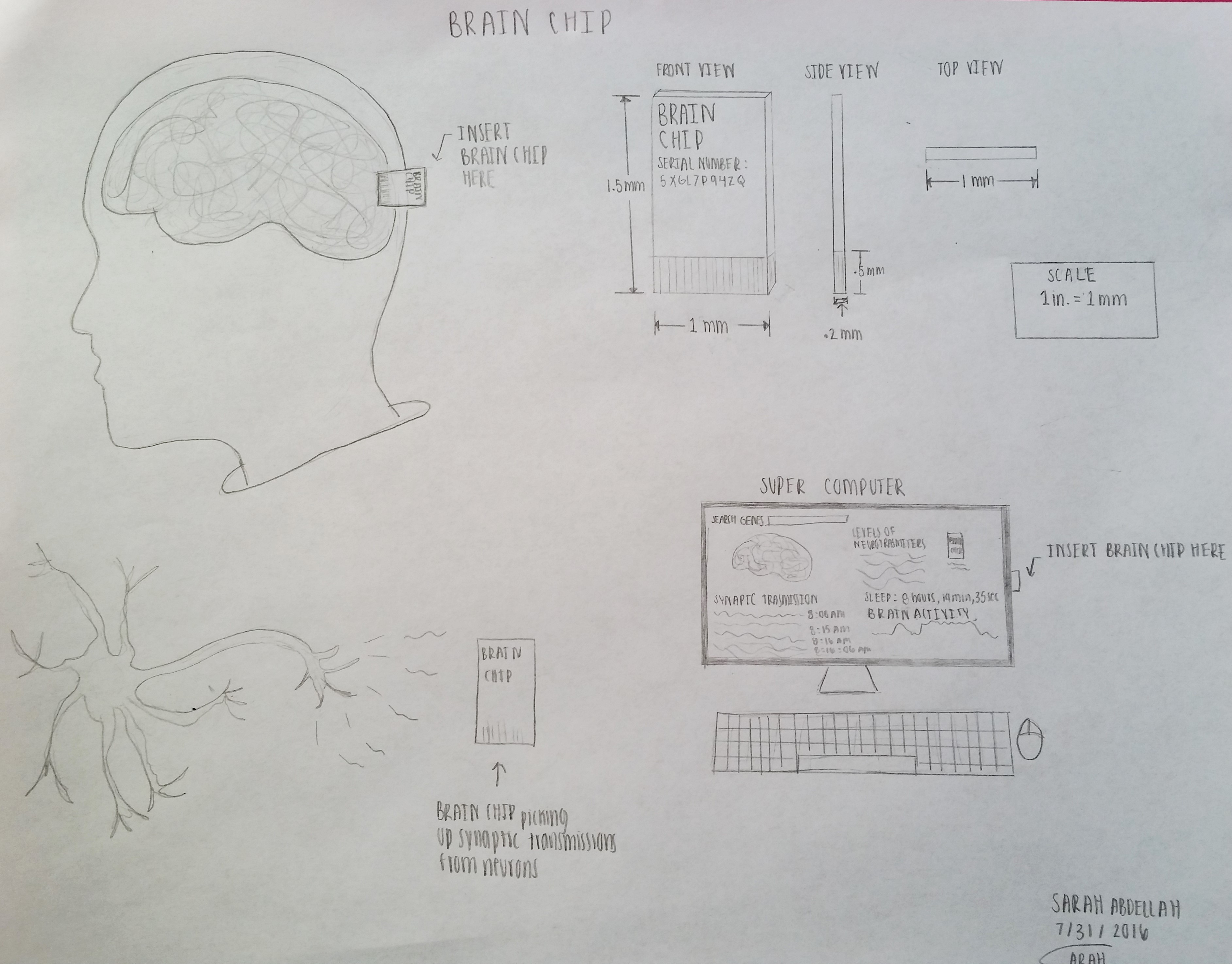 My new piece of technology is called a BRAIN CHIP, which has the ability to measure activity in the brain as well as remove genes that are thought to be associated with neurological disorders and input ‘healthy’ ones instead. The purpose of this chip would be to discover more about how the brain works from the molecular level since it would be able to comprehend all of the synaptic transmissions occurring in the brain by deciphering where the ‘messages’ go to and why. This BRAIN CHIP would also help neuroscientists discover how neurological diseases develop and even how to cure them by testing removing certain genes and replacing them with the same unaffected gene by plugging in the chip into a slot on the computer.

The BRAIN CHIP would be implemented by plugging it into a special slot in your head, so that it can interact with the brain. The BRAIN CHIP would also be completely wireless, which is good since you do not want a tail sticking out of your head! There would be a need for a brain new software in order to display the findings of the BRAIN CHIP, once it is developed, it can be used for any species.

There would be several medical advances due to the creation of the BRAIN CHIP, such as the cure to Alzheimer’s disease, Down syndrome, schizophrenia, etc. For instance, the gene known for the risk of developing Alzheimer’s disease, APOE, specifically the variation of the gene: e4, could be removed from the brain simply and efficiently with the BRAIN CHIP. First, the BRAIN CHIP would have to be removed from the patient, then plugged into the Super Computer of the future with the database to encode the information of the BRAIN CHIP. Then the gene could be removed by searching for it through the genes present in that specific BRAIN CHIP, then “undownloading” the gene, which would take from 30 minutes to 24 hours, depending on the gene. Once the gene is removed, the BRAIN CHIP would be plugged back into the patient, and then await the results. If somehow the removal of that gene did not work, then that would be a key to neuroscientists that something else is wrong and could continue their research on animal specimen to find a cure. The BRAIN CHIP also has the ability to track all synaptic transmissions, which would give neuroscientists an insight on how the brain functions and how each part of the brain works together. Furthermore, the use of a BRAIN CHIP, would remove the need for neurosurgery as well as brain implants since the problem could be addressed by plugging it into a computer.